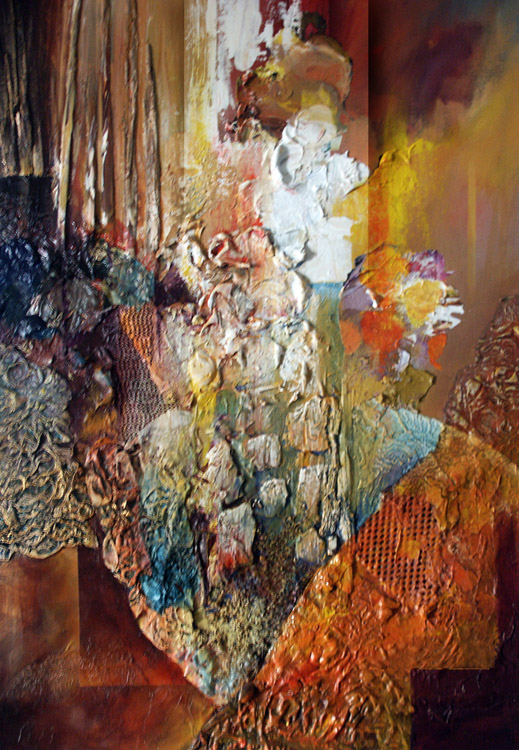 Jackson’s paintings feature highly textured multi-colored planes which are inspired by the mountains, valleys, fields, woodlands, wetlands, minerals and vegetation of his native Virginia. Some of Jackson’s paintings such as Shoal, Shenandoah, and Mist relate directly to his reaction to particular moments and specific locations. Other works like Frost, Moss, and Quartz capture the spirit and essence of nature’s raw components.

Jackson employs heavy applications of acrylic paint, acrylic gel and an array of found natural and man-made materials such as tree bark, grasses, sand and fabrics.

Hubert Jackson was born in 1943 in Culpeper, Virginia. In 1971 he earned his Master’s degree in painting from Howard University. In the early ’70s, he participated in the historical national movement of community based mural projects under the advisement of Hughie Lee-Smith. In 1999 Jackson retired from 34 years of teaching art in the Washington, D.C. public schools and settled in Colonial Beach, Virginia. In 2004 he attended the Corcoran School of Art. Jackson has exhibited extensively. His work is in a number of private collections in the U.S. and in foreign countries such as Lesotho, Ghana, Guinea and New Guinea, through the Artists in Embassies program. He is co-founder of the Wider River Gallery in Colonial Beach, Virginia.